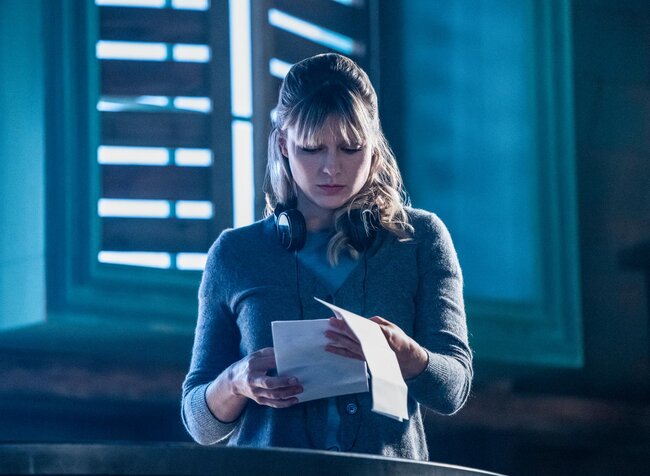 This Sunday, The CW’s Supergirl returns for the final run of season 5 with a Lex-centric episode that marks Melissa Benoist‘s long-awaited directorial debut. Benoist has been dying to get behind the camera since season 3, but wasn’t able to until now because of scheduling conflicts. Luckily, it seems like it was well-worth the wait because she got to helm an episode that diverges from the show’s usual structure and perspective, which she admits was initially quite daunting.

Cleverly titled “Deus Lex Machina,” the flashback-heavy hour essentially starts on day one of the post-“Crisis on Infinite Earths” world and sheds light on all of Lex’s (Jon Cryer) behind-the-scenes machinations we haven’t been aware of — from manipulating Eve Teschmacher (Andrea Brooks) and his sister Lena Luthor (Katie McGrath), to pitting Supergirl against Leviathan. In other words, it’s very similar to season 4’s “O Brother, Where Art Thou,” except this time around the criminal mastermind is trying his hardest to keep his Kryptonian hatred in check so that he can focus on defeating Leviathan.

Below, Benoist walks EW through her experience in the director’s chair, working with Cryer, and the challenges of handling such an exposition-heavy episode.

ENTERTAINMENT WEEKLY: What jumped out at you from a directing perspective when you read the script for the first time?

MELISSA BENOIST: Considering it was the first time in the director’s chair for me, I think I’d be remiss if I didn’t say how terrified I was. That just went without saying, that I was scared, but reading it also had this thrilling aspect to it because I was going to get to be the one to visualize it and make sure the tone was coming across. I guess only since season 4, we’ve had these episodes that were a departure from the story and took a step back and gave us Lex Luthor’s point of view, and this is one of those episodes. So, I couldn’t believe how lucky I was that I got to be the teller of that particular story for our season, where we recap the entire season from Lex Luthor, Jon Cryer’s eyes. And I was very excited to get to work with him closely in an actor-director relationship. Aside from the initial terror, and wondering whether or not I was capable of doing it, I was so excited and immediately just imagining what I wanted to do and thinking of shots.